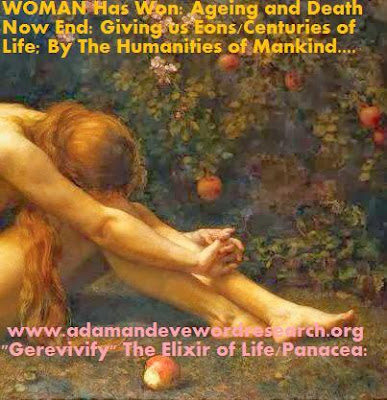 {BELOW A VIDEO OF GOD TELLING ME AGAIN TO SEARCH EAST AND WEST FOR THOSE WHO CAN BECOME PART OF HIS DESTINY! WHAT MANKIND CALLS UFO'S THIS DAY {SOME BEING FALSE, BUT MANY BEING GOD AND HIS ANGELS} ARE IN REALITY IFO'S "IDENTIFIED FLYING OMEN'S" EXODUS 13:21-22. THE LORD HAS SHOWN HIMSELF TO ME AND MANY. AND TO THE ENTIRE EARTH BELOW IN 2004 HIM COMING THROUGH THE CLOUDS WITH HIS ANGELS IN ALL HIS GLORY AND ALL THE EARTH HAS SEEN MATTHEW 24:30}

LINK: To the Information on the Causes and Cure for Aging - Secular:

THE Purpose of the Bible and all Writing of Mankind/Womankind has come full circle. God's word He brought the Earth, from the Egyptians, to the Greeks, to The Mighty Hebrew has now come into full view... The Glorified Bodies He promised us, Are now soon to begin developing, by being healed of the Infection first Contracted by Eve and ADAM in the Garden of Eden.

I By way of His instruction to Man, I have found the keys to His Great Mystery Rev: 1:17-18 and 10:7 and He has visited me, and has shown Himself to others whom I contact, so as to wake and gather us, for the now beginning of His Glorified Bodies {living again as in the days of Noah/Noe. Living Centuries instead of mere decades} for those who will inherit Earth.. Matthew 5:5 and 25:34 and Rev:5:10 and 21:3..

Now still this day, due to the massive infection the human being and all Life forms have, which was according to the Bible first contracted by Adam's Children when Eve ate of the Infected/forbidden fruit.. And now suddenly in this day, all the major writings of our Ancestors have been proved by Science.. Especially that of the Greeks and the Mighty Hebrew.

Now because of the still faltering Priests and Priestesses.. I have had as He instructed long ago, I have had to go to the Secular.. {Matthew 22:1-15 those who think they are bidden for the inheritance of earth, will not be, so He God will send those Sent John 13:20, send them out on the highways to find the good and the bad. Meaning whether Atheist, or Secular, or Gnostic. Any who can understand the Hugeness of this day and hour of the Glorified body} Having to do so, Due to so few of the House of God being able to grasp the fact that the Bible as all historical writings of the Egyptians, to the Founders of America are not just true, but now coming into completeness and the fullness of their meaning and purpose.. 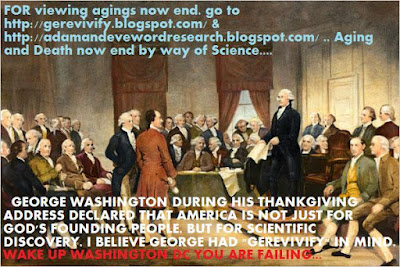 {You can see at the near bottom George stated for Science. George was a President and a protected Prophet of God..}

George Washington Stated in his Thanksgiving Address that America was not just for God's Children. But America was being founded for SCIENCE... God's main purpose for His Word. To bring forth Science.. NOW That I have found in the ancient Writings of the Again stated, the Egyptian, the Greeks, the Hebrew, the Hindu and others the way of ending sorrow/pain/sickness/death as our Lord told us His Word was for Rev: 21:4 once again mentioned as proof. Which is all accomplished by my finding now the way to end Eve's infection she contracted, and none realized we all have, literally every single life cell on earth, every Life form on earth has this infection. And is why all creatures age and die, and is why we mankind has believed aging and death had to be, due to all animals on earth having the infection that makes them decompose while living then finally die. Man/Woman are supposed to age/exist to a certain point, then the body maintain that condition for centuries. We are not to become elderly, but we are to become stronger and more Virile as we not age, but as we Exist..

Here at these links you can view the sites where in I call out to Science and business men and Women, who are of not priests or priestess or prophets or prophetesses.. But do understand God's most Powerful Creation called Science and Wisdom.. We search for financiers so we may now save you and your parents hopefully, and your grand parents.. People who have nearly missed their destiny. We could have been in Glorified bodies now for over two centuries due to the findings of Science, and due to the code/keys of the Hebrew Bible {again Rev:1:17-18} and of the Greeks, and of the Egyptian and so on.. Go to the sites listed below, wherein you can become investors/partners/donors in the Destiny/History/Future of Man/Womankind.. ONE ... {Respect to all Born of Adam}

LINK: TO THE END OF AGING AND DEATH INFORMATION SITE:

LINK: TO DONATE RIGHT NOW FOR YOUR GLORIFIED BODY AT INDIEGOGO CROWD FUNDING: